The general background is still being sketched out, so it's just pictures for now. He stands a little shy shorter than the Stormcast. Hope he passes muster in this new Age of Sigmar. 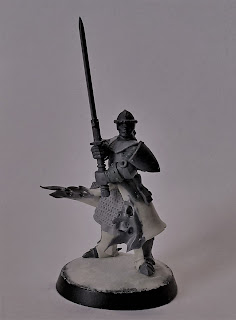 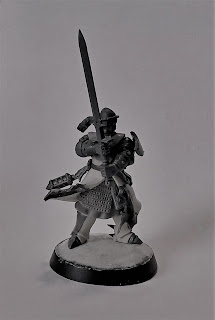 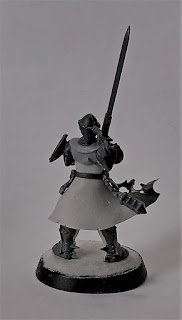 
The rise of the witch hunter in the Mortal Realms came out of necessity at the beginning of the Age of Chaos when the isolated settlements of man needed champions armed with both the knowledge and weapons to fight the dark forces of the ruinous powers. Indeed, the term ‘witch hunter’ has become something of a misnomer considering their foes include not only witches, but also the predations of daemons, cultists, rat men, the various forms of the undead and a thousand other cthonic entities that have risen in the apocalypse.

Neither was it just individual hunters that answered the call in defense of the Mortal Realms, but rather, as the millennia passed, whole family dynasties of hunters came to be. Relying on the foundations of wisdom from their ancestors, certain hunter bloodlines became infamous across all eight realms, each family armed with their own weapons, knowledge and creed. Indeed, each realm can be said to have influenced each family in the ways they wage war against their enemies: those in the realm of Shyish utilise bells, those in the realm of Hysh use mirrors and captured light, those in the realm of Aqshy wield weapons of purified flame, and so on.

Nor is the knowledge base universal amongst the dynasties for each often hold massive libraries filled with unique tomes of lore reflecting their individualistic creeds. For some are more than willing to utilise the blasphemous magicks and weapons of their enemies against them, whilst others are staunchly against such a practice; citing reasons from the robustly pragmatic to the fervently dogmatic. Similarly, not all families are solely devoted to the grace of Sigmar, but will often call upon the forgotten gods of order (and sometimes to other deities or pantheons of a more ambiguous alignment) for aid in their works.

Jovan Voortdurend belongs to a fractured bloodline of what is often referred to by the other dynasties as a “Ragged House of Vagabonds”. Despite his acerbic nature, his tattered demeanor and his ‘whatever it takes’ attitude to his work, he is an incredibly proficient hunter. Armed with a vast pool of knowledge and variety of esoteric weapons, he earns very few friends amongst his peers for his creed, but his results cannot be argued against; even if most say he walks a dark path and is bound to fall off the edge soon enough. 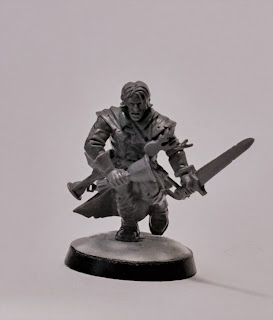