It's about time I wrote something about it seeing as I've been beavering away at my guardsmen for a goodly fortnight. The Sleeter's terms were simple; to explore the nightmarish future of the 41st Millennium through the eyes of the humble guardsman. It certainly is an interesting proposal and one that I've seen interpreted a number of different ways by other modellers. Some have chosen to focus on a cohesive look for their regiment, whilst others have gone for a riotous band of individuals.

I'd like to think that I've gone for the middle ground with my interpretation; a cohesive look for my regiment and adding a smattering of individual touches. Another thing I noticed when I first started was that the feudalism aesthetic was flavour of the month, so I had to rethink my approach. In the end I went in a direction I'd gone before; the WW1 aesthetic. 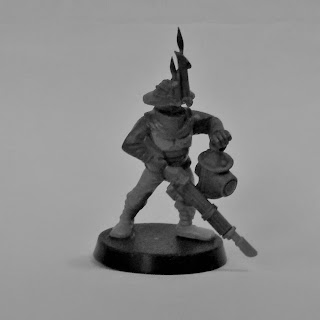 For me, the first World War is perhaps the closest real life event we have that mirrors what war is like in the 41st Millennium; they had vast advances in technology but their military tactics hadn't really advanced much since the Napoleonic era. I've also read it described as the most brutal war mankind has ever fought, not to mention the accounts of the veterans who described trench warfare on the frontlines to be the closest thing to a genuine hell on earth.

I did not seek to glorify the nature of that war in my aesthetic, nor caricature the very real nightmare those veterans suffered in those four hellish years, but rather hope to present these two theme in a very visceral way. However, it has occurred to me only now that the deadline is upon us, that Remembrance Sunday is just around the corner.

So it is that the Albion IV 'Iron' Corps, 27th (Mercia) Division, 94th Brigade, 2nd Infantry Battalion, Y Company march to war in the Thorn Moons. As one of the first field armies of the Imperial Crusade into the Crataegus Fragmentum, they were also one of the first to make planetfall into the meatgrinder. These five represent perhaps the last of the Albion IV, cut off from their own, they can only hope to regroup with a friendly force before they're all lost..... 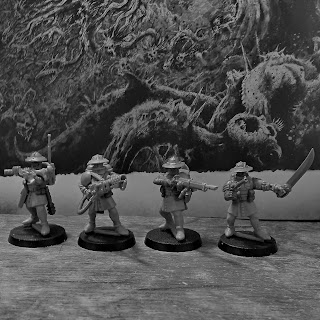 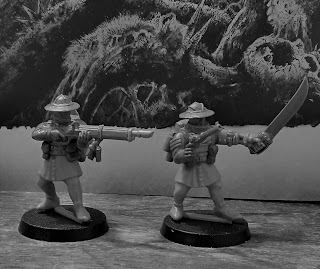 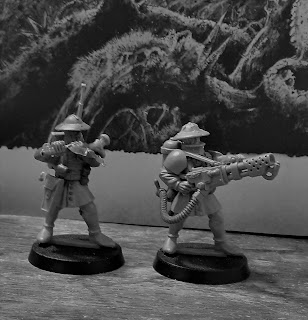 They went with songs to the battle, they were young.
Straight of limb, true of eye, steady and aglow.
They were staunch to the end against odds uncounted,
They fell with their faces to the foe.

They shall grow not old, as we that are left grow old:
Age shall not weary them, nor the years condemn.
At the going down of the sun and in the morning,
We will remember them.

They mingle not with their laughing comrades again;
They sit no more at familiar tables of home;
They have no lot in our labours of the day-time;
They sleep beside the Emperor's Throne.