Okay, so today, because the weather was rather nice, I visited my local zoo with the Runtherd and it got me all inspired because I saw lion tamarinds (that look just like Jokaero), licky skinks (which remind me so much like the old 40k slann models) and capybaras (because they're my favourite animals).
Now, the cause of this inspiration? Well, way back into my childhood, whilst my sister was into Sylvanian Families, I, being something of a tomboy, was more captivated by Battle Beasts (along with Monsters in my Pocket - the gothic 80's version of Pokémon). So, in the meanwhile before my super secret project starts, I'm really tempted to do some kind of space menagerie; with a slann, a Jokaero, and a whole host of other anthropomorphic races (I really want to make some kind of space capybara, maybe based on a Skaven model), because that's the kind of mad thing they used to do back in the Rogue Trader days.
Does anyone else have any other animal ideas to anthropomorphise into the gothic darkness of the 41st millennium?
Спасибо за прочтение﻿﻿﻿﻿﻿﻿﻿﻿﻿﻿﻿﻿﻿﻿﻿﻿﻿﻿﻿
Posted by Gretchin at 01:43 7 comments:

Okay, so it really has been a long time since I've worked with metal miniatures and with a super secret project I have coming up soon, I thought it would help me to get back into the groove of converting metal.
So this is Inquisitrix Inlatura 'Lat' Balaur, a very very simple conversion with a little greenstuff. 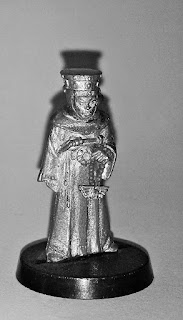 After all the feedback I received from the lovely denizens on Ammobunker, I went back to my spyrers and reworked them. The heads have been completely redone, with face masks from the Dark Eldar Wracks replacing two of them, and two bare heads from the Space Marine Tactical Sprue replacing the other two. I was never happy with the first version of the Yeld, so I completely remade it and I'm much more satisfied with the result now even though it's far removed from the original description. The other point of contention were the feet, with some suggesting that they be rounded off, but after much consideration, I decided to leave them as they were. The only thing missing from them now is some mechanical sockets to be sculpted onto the Orrus's legs. 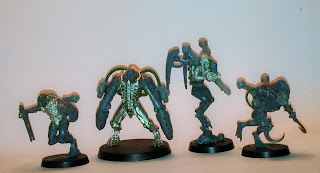 I actually finished her nearly two weeks ago, but have only just got around to photographing her. The theme this month was 'half and half' and immediately I leapt on the idea of making an astropath as they are typically thought of as walking in both the material and immaterial world, living a half-existence in either realm.
To be honest, when it came to visualising her, I instantly hit a brick wall and it wasn't until I was thumbing through The Emperor's Will, that I came across an almost hidden piece of artwork that was to serve as inspiration. Aside from the head, which I deliberately and shamelessly stole from the Borg Queen, I endeavoured to remain true to the image. 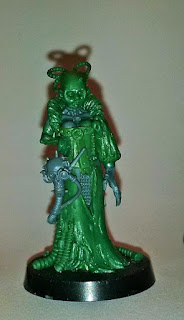 The first White Dwarf I ever bought was numbered 190, the edition that saw the first release of Necromunda. Even in those pages they mentioned the previous prototype Confrontation which later became the template for Inquisitor six years later. Confrontation seems to have its fanbase amongst the INQ28 community, possibly because of the level of freedom of design it gives you as opposed to Necromunda (but who doesn't love muscled himbos who look like they've been ripped straight out of Streets of Rage?).

Anyway, back in 2013, I was lucky enough to discover the Confrontation project done by the Spiky Rats (and the subsequent battle report posted on Opus Maius) and I was inspired by the sheer majesty and madness of the whole endeavour. I started to design my own spyrer warband because I really didn't like the originals as they were far too colourful and manga-esque to deserve the flavour fluff of feared daemons stalking the shadows of the underhive.

I pulled inspiration from the bio-suits that the Engineers wear in Prometheus and decided to go Gigeresque with my design. The first one I started with was the Malcador mostly because it seemed the easiest, especially with the arms from the Dark Eldar Wracks set with the hand scythes. After the Malcador, I set the whole project on the back burner until about a month ago. The Orrus was inspired by John Blanche's illustration and the Jakara went through one design remake before I was happy. The Yeld, however, was the trickiest to nail down and I'm still not sure it's right, I think the wings are a little too organic looking and I may change them before painting. 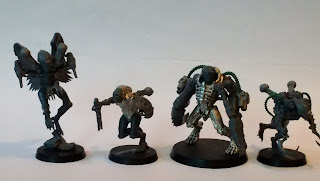 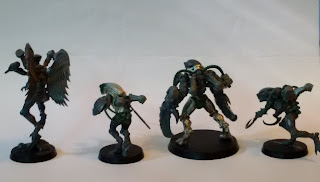 Sadly not a character from Sergei Lukyanenko's awesome series of novels, but rather a world weary man who patrols his sector dutifully, keeping an eye out for any trespassers and ner-do-wells. I knew that I wanted a final member of my Pilgrym warband and I have to credit where it is due and thank AceOfBlades from Ammobunker for their amazing conversions of Bretonnian Archers which inspired me.

I imagined that night watchmen would be those considered either too old or too unfit for drafted service in the PDF (or maybe they had already served and had long retired), they weren't well equipped (normally having to suffer older gear discarded by the PDF) and their patrol areas are those that the regular arbites units are unable or unwilling to go (due to excessively cramped spaces, a zero crime coefficient in the area, etc.).

For my night watchman, I designed him to look like a British 'Tommy' from WW1, with puttees, a leather gorget, balaclava and tin helmet. I even modelled his lasgun based on the Lee-Enfield rifles used in that era. 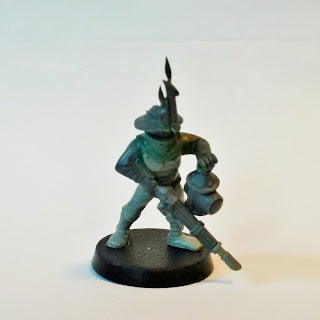 A while ago I set out to convert Mistress Osu based upon a photo of Sigourney Weaver but wearing bespoke terminator armour similar to the old Rogue Trader inquisitors. Sadly the photos are terrible (and I'm not so happy with how her hair turned out), but I may revisit her before painting later.

I decided that she would be a minor psyker and a member of the Ordo Xenos (though in the Grime Lights narrative she won't be dealing with aliens) but aside from a propensity for appearing androgynous, I haven't really thought much about her background yet. 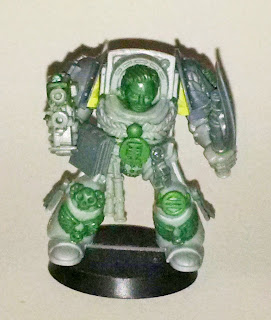 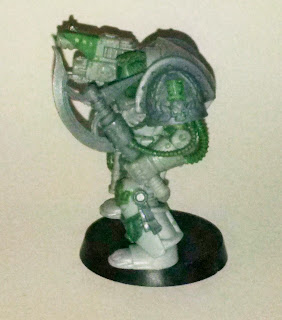 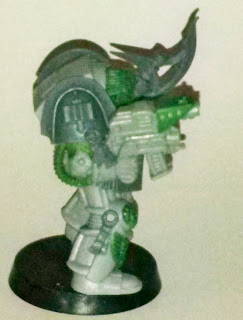 Oh, and apologies for the early post, but I am taking a day trip to the coast with the Runtherd to get out of the city for a while.