Carrying on from The Green Death post earlier, I've been beavering away at this little warband for about a week, determined to create a small host of characters that were simple to build with only a little greenstuff intervention. 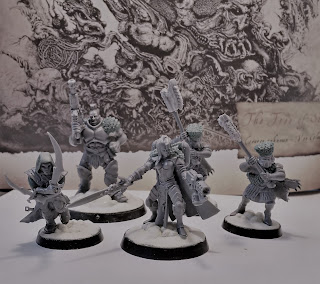 Most of these characters (with the exception of Quayle) have gone through a number of rethinks on particular parts, but I'm rather pleased with how they've turned out (especially the Argyraspides). 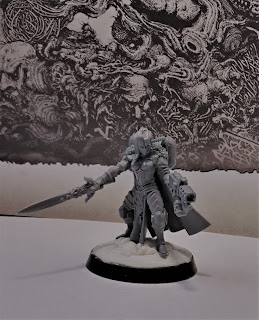 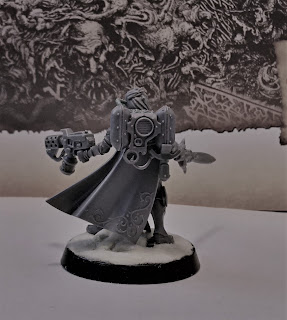 Inquisitor Dimmock (name pending) still needs a little work, adding extra trinkets, tokens, gewgaws and fetishes, so I will be rooting through my bits box before painting her. 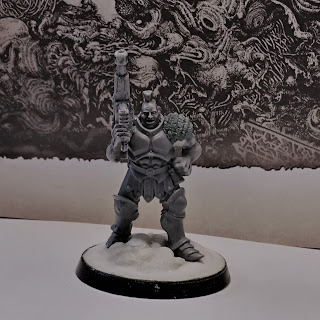 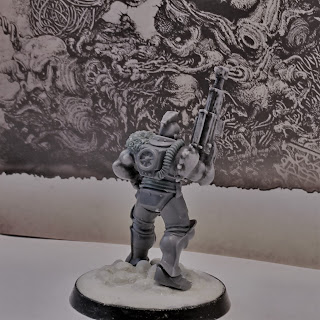 As I've said, I'm rather pleased with how he eventually turned out, using an old plastic Goliath that I was donated by a friend. 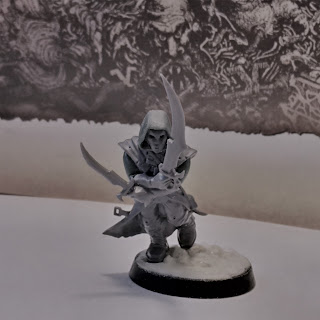 Quayle was actually made for a different project idea I had several months ago, but was discarded. I'm really looking forward to trying out some new painting techniques on him, more specifically, painting his blades to look like pink/yellow coral. 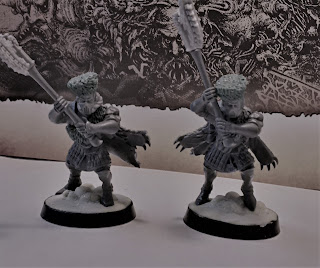 Holy Arborists of the Orders Botanicae

I was drawn to the idea of including a couple of bizarre lumberjack-warrior monks. Indeed there is a rather nice quote in which the term 'lumberjack' is first used:

"my misfortunes have been brought upon me chiefly by an incorrigible, though perhaps useful, race of mortals called LUMBERJACKS, whom, however, I would name the Cossack's of Upper Canada, who, having been reared among the oaks and pines of the wild forest, have never been subjected to the salutary restraint of laws."

Anyway, looking forward to getting these guys painted and maybe even get a game in (if I'm lucky)!

Have you ever seen a face in the skin of a tree that looks like it’s screaming?


It was on Vertellus, a relatively new world in the bosom of the Imperium. For its first settlers, it had been paradise; a goldilocks planet hidden away like a diamond in the rough. For six hundred years, the serfs of mankind had toiled away on its surface, growing crops from its soil, building cities from its stones. It had been so productive for six centuries before it had abruptly fallen silent.


I was still an Interrogator in the service of my late master, Inquisitor Boym Khirurg, when he had directed us to Vertellus and to his fate.


He dispatched an entire company of Argyraspides, battled hardened warriors armed and armoured with the best wargear our Imperial artificers can forge, and they made planetfall without incident in the capital city of Dilmun. For a day and a night, they searched amongst the buildings and structures only to discover the entire metropolis seemingly abandoned.


Just before dawn on the second day, our warriors fell silent too.


Despite his increased age, my master was still an irascible man, preferring to take the fight to the enemy (his ruthless pogroms against the alien threat during his years of service in the Inquisition remain, to this day, required reading material for acolytes in the Ordo Xenos). Within an hour, we were aboard a second lander, surrounded by my master’s personal guard, prepared to meet this unseen adversary with a wrathful arsenal.


Despite the atmospheric telemetry taken by our biologis-friars and their misshapen servitors reading free of airborne taint or corruption, my master instructed the ship in orbit to transmit an Inquisitorial Quarantine edict to the sector Ordos. Nevertheless, Dilmun was as quiet as the grave and of the two hundred Argyraspides, there was no trace.


For half the day, any explanation eluded us, yet we remained in a tight knit group as we searched, prepared to repel any external force with righteous prejudice.


As the light began the fail, they came for us.


I could not fathom what I was seeing at first; they looked human but all vestiges of humanity had been stripped away. Verdant green veins snaked beneath their almost translucent skin. They groaned deep within their throats like the sound of trees creaking in the wind. Some were in various states of undress whilst others were completely naked. Some were wearing the armour of the Argyraspides.


They were swift when they launched themselves at us with ferocious abandon, but we were equally quick in our response. The gunfire barrage was deafening, hammering into the tainted flesh of our attackers and felling many. Some burst apart like ripe fruit, spraying great gouts of white fluid tinged with green. A few of the forerunners had made it past the curtain of projectiles and were met in close combat with the rending bite of chainswords….


My master and I watched in horror as we witnessed the resultant effect of when this white-green blood fell upon the bare flesh of our own warriors. Corruption rooted almost instantly, their bodies racked with paroxysms as the infection raced through their bloodstreams. Even the combat servitors were not immune; their bionics and implanted weaponry falling off them like dead leaves to be replaced with prehensile vine-like structures as anything mechanical was rejected.


Faced with such abhorrence, my master ordered a withdrawal back to the lander, commanding that our flamer units maintain a wall between us and them. However, our attempts at departure was met with an even more fierce resistance and to my shame, with our craft in sight, my master fell to them.


They had taken to using the buildings against us: as hard cover and for something much more atrocious. They scaled the walls like creepers before hurling themselves off to burst upon the ground at the impact, scattering their hideous corruption like profane grenades. My master was struck before I could shield him by a minuscule drop that landed upon his wrinkled cheek. Just a drop.


He threw to me his treasured power sword with shaking hands and collapsed to his knees. He spoke no words, but his eyes gave me his last command as the perfidious rot began to spread across his flesh. I did my duty and granted him the Emperor’s mercy with a gliding sweep of his power sword. The remaining yards to the lander I fought with tears in my eyes.


Of the seventy-two members of my master’s personal retinue to have made planetfall, only a score of us returned to the ship without taint. I was inconsolable with grief for the fortnight in transit back to the sector Ordos. I would have declared exterminatus on Vertellus but, whilst I have the fire of vengeance in my heart, I had not the authority to do so.


In my master’s posthumous testament, he had urged the sector Ordos to grant me full inquisitorial status due to my exemplary three-decade service under his tutelage. Within a week, in a solemn and quiet ceremony, I was bestowed my rank and sigil: my first declaration was the death of Vertellus.


However, it was some years later when I discovered that my edict exterminatus on that planet had never reached any recipients, yet it remained under quarantine. I suspected that a greater authority within the sector Ordos had somehow buried my edict, but any subsequent investigations or protestations I made came to naught.


A century has passed since then and whilst I like to think I have become tempered with experience, I still have the occasional nightmares about Vertellus that wake me from my sleep. So, when I heard about the recent events on Terra regarding a ‘green mechanicum’, that world was the first that came to mind.


In those hundred years, the sector Ordos had not been idle. Vertellus had been monitored continuously from orbit. Sixty years ago, they had instructed survey teams back down onto the planet and do you know what they found?


Nothing: no bodies. Not even any trace of the infected.


It wasn’t until some years of thorough research, they discovered what had happened to the original inhabitants, to those creatures that my master and I had faced that night. They had taken root and joined the trees of the world’s forests, with bulbous white-green fruit hanging heavy from their boughs.


So, I ask again: have you ever seen a face in the skin of a tree that looks like it’s screaming?

*Title shamelessly taken from the Doctor Who serial
Posted by Gretchin at 01:43 1 comment: